By Adam Lewenberg
In the January/February 2014 issue of Mailing Systems Technology, I wrote an article about how the USPS has been taking our permit funds when they become inactive and dormant. Since then, the Office of Inspector General of the USPS conducted a study confirming these findings and made recommendations for changes that were rejected by USPS management. The goal of this article is to make you aware of this issue, explain how these funds get lost and what resources you have to get money refunded (and convince you to push your postal liaisons to make changes to this archaic policy!).

The good news is that the Office of Inspector General provided the statistics that I was unable to obtain through multiple Freedom of Information Act requests. According to the study titled Dormant Advance Deposit Permit Accounts, Report Number FT-MA-15-001, "The Postal Service refunded $34.3 million to customers from October 1, 2008 through June 30, 2014. During fiscal years 2012 and 2013, the Postal Service refunded $9.2 million of that amount to customers; $15.6 million of customers' unclaimed dormant account balances was considered income to the Postal Service during that same timeframe."

The significance of this issue is that the USPS is admitting that it considers unclaimed dormant account balances as income. Also, during these two years (Fiscal 2012 and 2013), 63% of these dormant funds were not returned to customers. If we extrapolate these numbers over 10-20 years there could be hundreds of millions in dormant permit funds that the USPS has held onto and made it very difficult for the average entity to claim.

The big issue comes with how the United States Postal Service handles these funds. With most organizations (corporate, non-profit and state government), unclaimed funds are turned over to the state's unclaimed funds office where it is easy to search for your money. These funds will typically remain visible on that state's website or on www.missingmoney.com until the money is claimed. With the USPS, at 24 months of inactivity, a notification is sent.
The entity has 30-60 days to collect their funds, (or renew the permit) or the money gets transferred into general ledger account where the money is considered income to the USPS. To make matters worse, these dormant permit accounts are deleted from POSTALONE! and archived one year from when the funds are transferred. The only way to get this money back is to know what funds you had that were lost, then to go to that specific local postmaster or district for help. There is a procedure that can be followed to get access to the information, but the visibility is lost at the local level.

I have included the chart below so you can compare the Lost-Funds Process for the USPS vs. most other entities. The big difference is the long term visibility. With the USPS, visibility is lost at 26 months with one single notification to the customer unless a local postal employee goes the extra mile to help clients (which I am sure happens). This is compared to you being able to search for your money on websites that remain active for much longer periods of time. 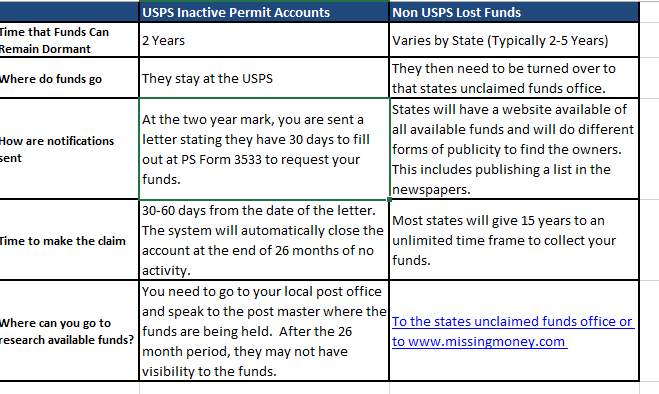 The USPS claims that it cannot publish these lost funds on a website the way other entities do because of "USCODE - 2011 Title 39 Postal Service, 412:" Non-disclosure of lists of names and addresses, except as specifically provided by subsection (b) (Regarding Census data) or other law, no offer or employee of the Postal Service shall make available to the public by any means or for any purpose any mailing or other list of names or addresses (past or present) of postal patrons or other persons.'
I feel that trying to return postal funds to the entities that lost them needs to be an exception to this law. Even if the lists are not published, there needs to be an easy way for an entity to do a search with the USPS for their lost funds.
The Office of Inspector General did recommend the following
Periodic attempts to locate customers' inactive and dormant accountsRetaining cancelled account information within the PostalOne! system for more than one yearThese recommendations were turned down by USPS management stating that the current process is "reasonable, efficient and effective." They also stated that the recommendations would "unduly burden the Postal Service with non-value-added processes that would add additional costs and inefficiencies."
When the USPS holds client funds, it is acting like a bank and should be held to the same fiduciary responsibilities. That is to make every effort possible to make these funds available and effectively returned to the customer. If it is going to consider dormant funds income after a period of time, this should be presented upfront on every permit application to create awareness to the way the USPS handles accounts.
Here are the main reasons postal accounts go dormant:
Site closed/merged/changed names/core contact left.Postage account was for a location outside the headquarters where visibility was lacking.Fragmented process inside the organization without one group responsible for managing the postage accounts.Money sent to prefund the account is looked at as an expense vs. an asset and not tracked.Multiple accounts set up at different post offices and for multiple classes of service to prefund mailings.The only way we are going to change this process is if we make the problem visible and put pressure on the Post Office. We need the United States Postal Service to create a public listing of these closed accounts or at least the name and address of the original permit owner made visible in a database that can be searched.

Here is how you can help:
Talk to your USPS Account Managers and local Postmasters.
Bring this issue up at your local Postal Customer Council meetings.
If you plan on attending the National Postal Forum, bring it up at the USPS booth.
Sign our petition at https://www.change.org/petitions/usps-create-a-public-listing-of-dormant-permit-accounts
I do not believe that the USPS is trying to be deceptive, but that their process is archaic and needs to be changed. When the USPS takes your prefunded postage, it is acting like a bank and needs to be held to the same fiduciary standards as any other financial institution. This means it needs to take all means necessary to manage your funds and make sure they get returned properly. There are over $50 billion in the various states' Lost Funds Offices. This money came from the public and private sector because everyone is supposed to return money that is not rightfully theirs. The United States Postal Service should be held to this same standard.

Adam Lewenberg, CMDSS, MDC, President of Postal Advocate Inc., runs the largest Mail Audit and Recover firm in the United States. Their mission is to help entities with large numbers of locations reduce mail related expenses, recover lost postage funds, and simplify visibility and oversight. So far in 2013, they have helped their clients save an average of 60% and over $12 million on equipment, fees and lost postage. He can be reached at 617.372.6853 or adam.lewenberg@postaladvocate.com.

Tueday's Tip: Weather - As Dangerous as Ever Next
A Complete View of Customer Relationships - From the Mail Center? Previous
More from Articles 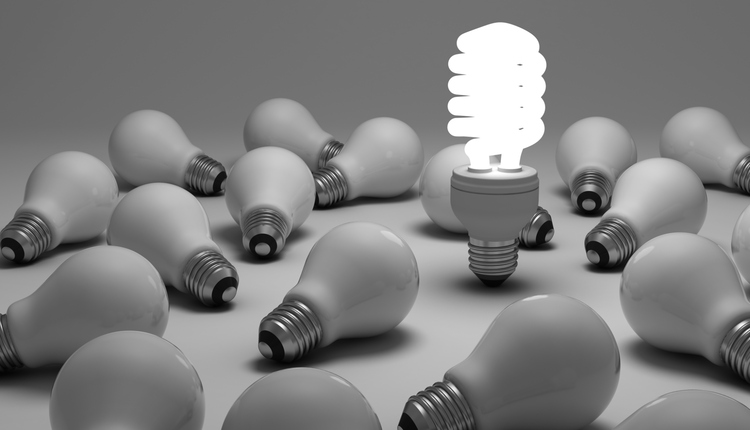 Easy Guide to Selecting the Right Shipping System
When is a document really redacted?
How Much Should You Spend on Marketing?
More From Adam Lewenberg

Easy Guide to Selecting the Right Shipping System
Mail Made Easy: How to Select the Right Folder Inserter System
Mailing Visibility Tools That Can Save You Money
Defining Best in Class Mail Operations
Top Mailing Equipment Changes of the Last Five Years... And What's in Store for the Future?
How to Buy an Incoming Tracking System
comments powered by Disqus